Over two hundred projects have been completed on behalf of clients. This case study concentrates on a particular example of a one surname package. To protect the details of the client, the names have been removed, but the remaining details are all correct. The charts are samples from the author's own family. 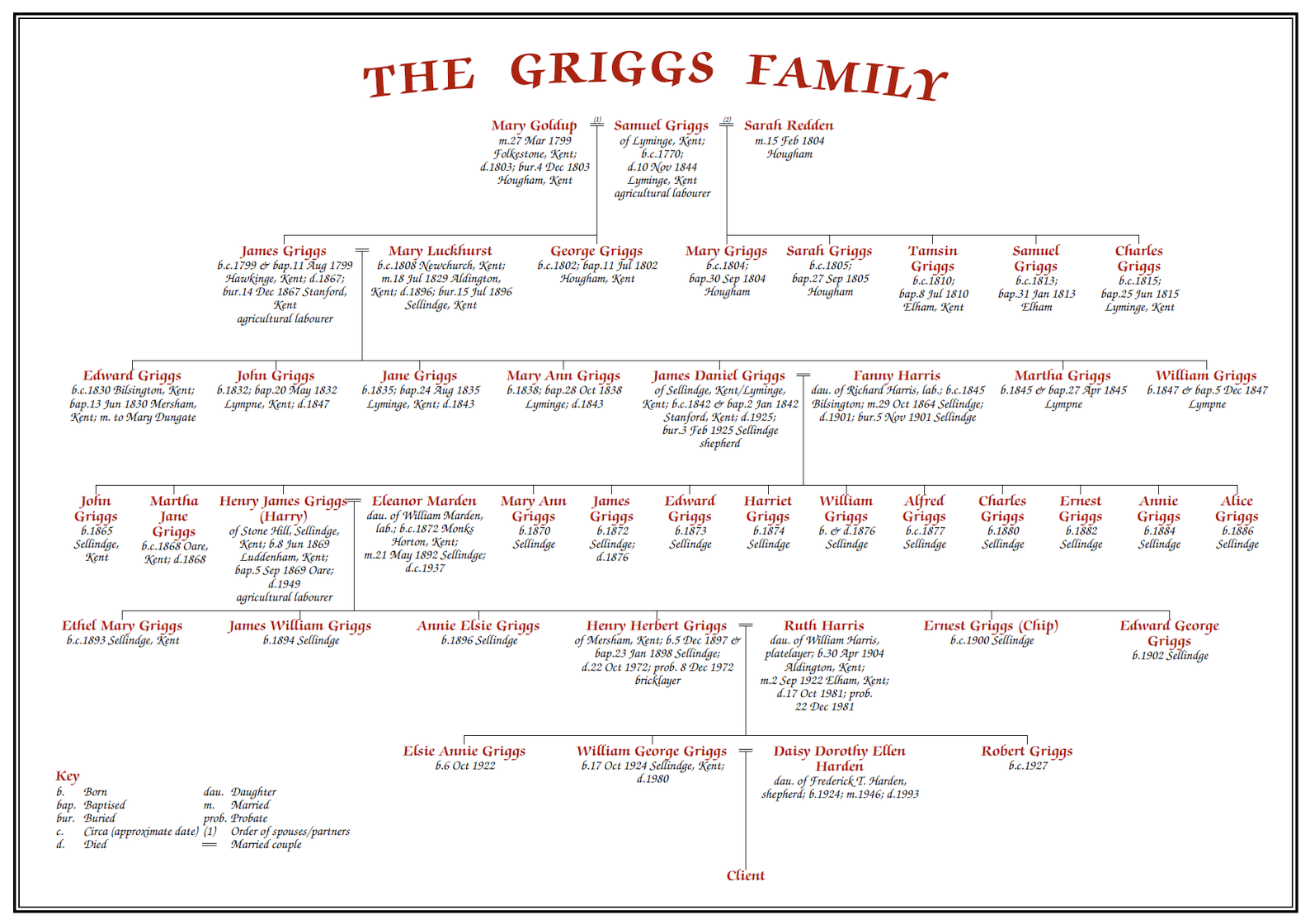 Dropline pedigree chart of the type typically produced in a one surname research package. A two surname package will include two of these charts, one for each of the surnames being researched. The pedigree package generally contains around 8 of these, and a pedigree chart (see below).

The client knew that his father was born on a particular date in January 1942, in Truro, Cornwall. The first document to be obtain was the corresponding birth certificate, which confirmed this date and place of birth, and therefore that the correct line was being followed. This certificate gave the names of his parents (the client's grandparents). This information was used to obtain a copy of their marriage certificate. They had married a few years earlier, in 1939, probably as a reaction to the client's grandfather being called-up for military service.

The same method was used to work back further generations, i.e. by using official birth and marriage certificates; back through the First World War, into the Edwardian Period, through the reign of Queen Victoria. A further generation was traced before the start of recording of births, deaths and marriages, using parish registers. The most distant ancestor having been born about 1799, in the reign of George III. England was a very different place back then, with a largely agricultural population, and only the very early start of the Industrial Revolution. 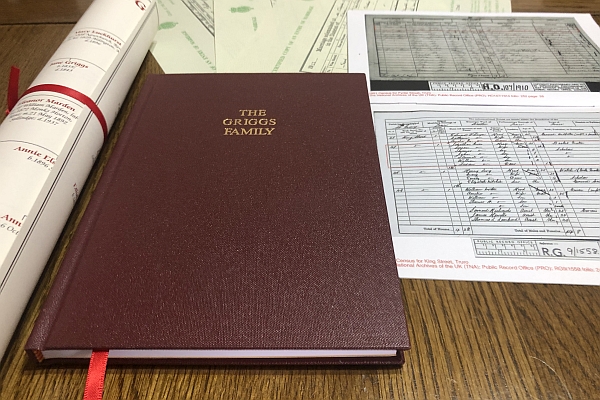 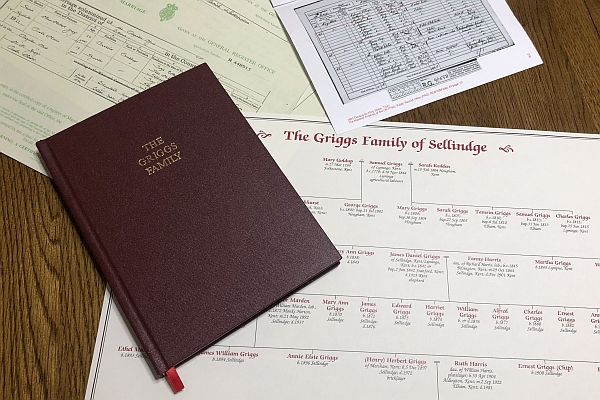 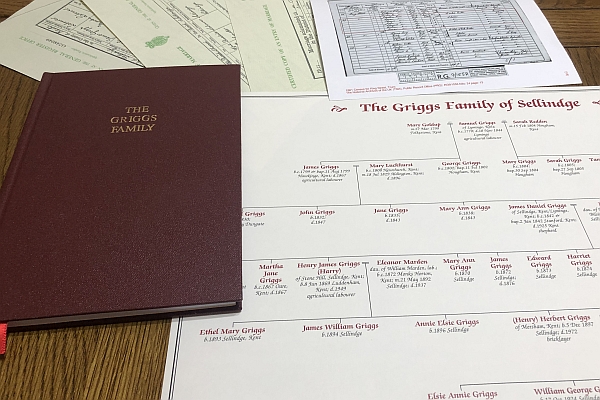 The family were located on the census returns, every ten years from 1841 through to 1911, and therefore giving a snapshot of their lives, as well as details about their homes, their occupations, and the name of siblings at each generation. It was found that at least four generations of the family were basket makers, and some authentic, contemporary information about the craft was added using old reference books published from as early as 1818, including a couple of illustrations.

One of the client's 3 x great grandmothers, who was born about 1825, was found to have been quite a character, and there were several articles from the local paper in the 1860s, concerning her behaviour. Her husband was running a beer house as a side line to his basket making business, and was reported for knowingly letting females of notoriously bad reputation from gathering at his public house.

...I am still digesting the contents but would like to say that it is a very nicely presented piece of work that recognises the lives of my grandparents, as intended. Thank you for your efforts in bringing my ancestors to life...

The research in summary included a total of eight generations, including the details of those provided by the client, back to his 4 x great grandfather. The details were completed into an 80 page book. The chart contained details on 86 people, and the client was also sent copies of 26 documents used in the research process including: five official certificates, copies of baptisms and marriages from parish registers and census returns. 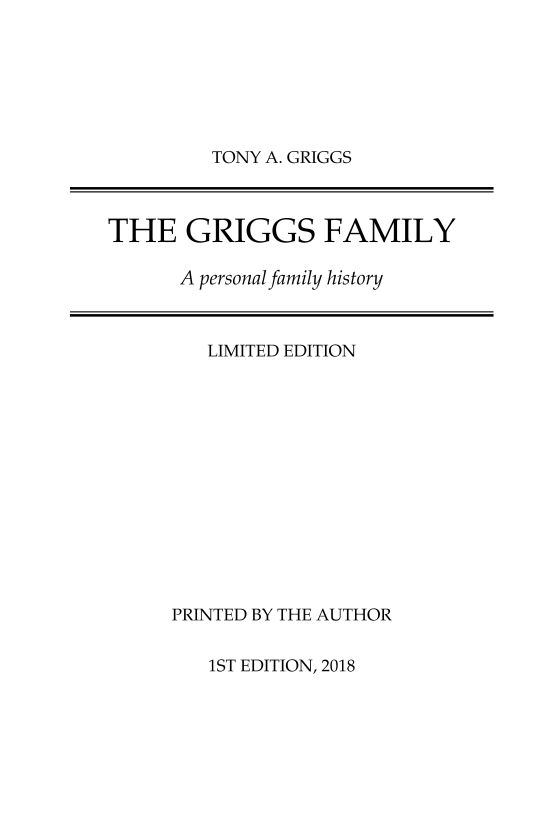 The research is completed as a proper book, which includes, for example, a title page inside. A dedication page can also be added if required. 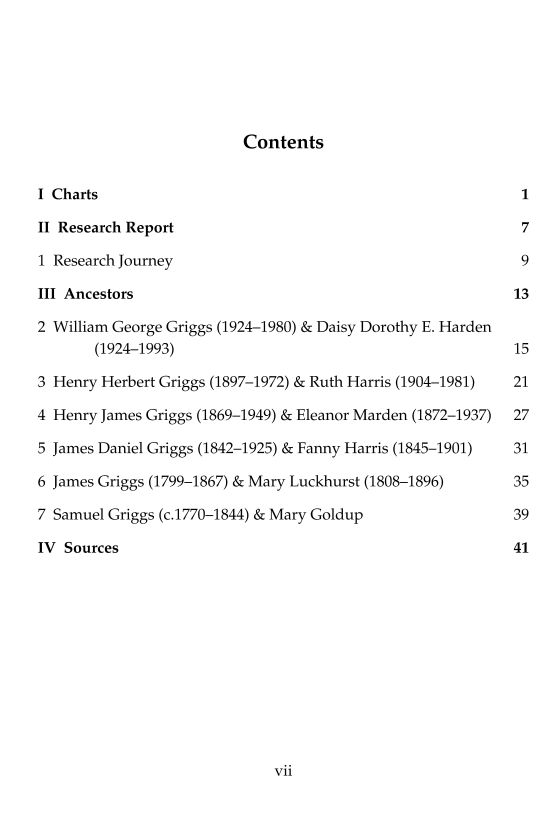 The table of contents shows how the books are organised, with charts, the research report, and details on each ancestor. In addition, at the back of the book are transcripts of the sources used, and an index. 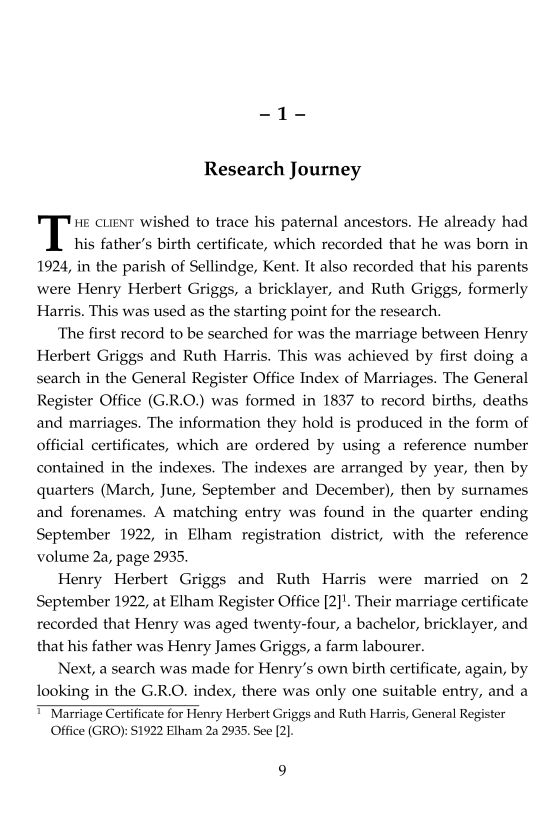 The research report described how the research was conducted, the records which were used, and how these prove that the people named really are your ancestors. 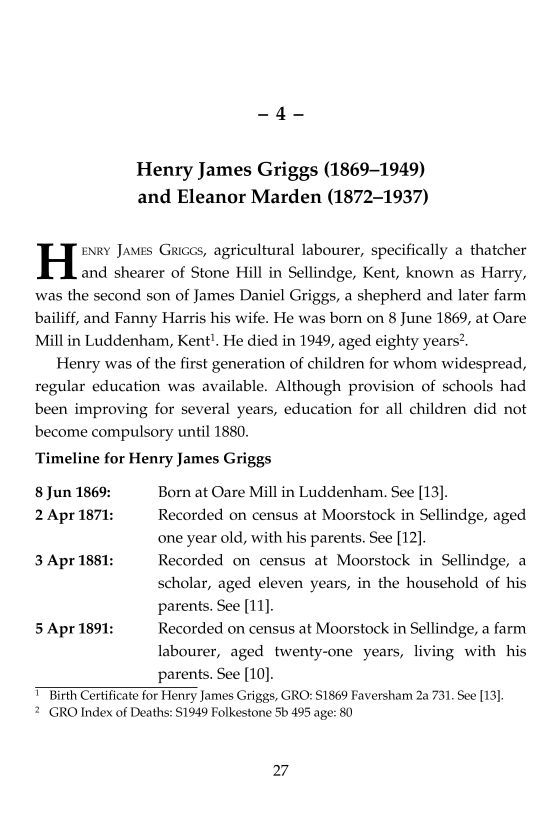 The books include a short narrative on each ancestor. The details will vary for each person, but will include information such as where they lived, when they were born, died married, and their occupation. 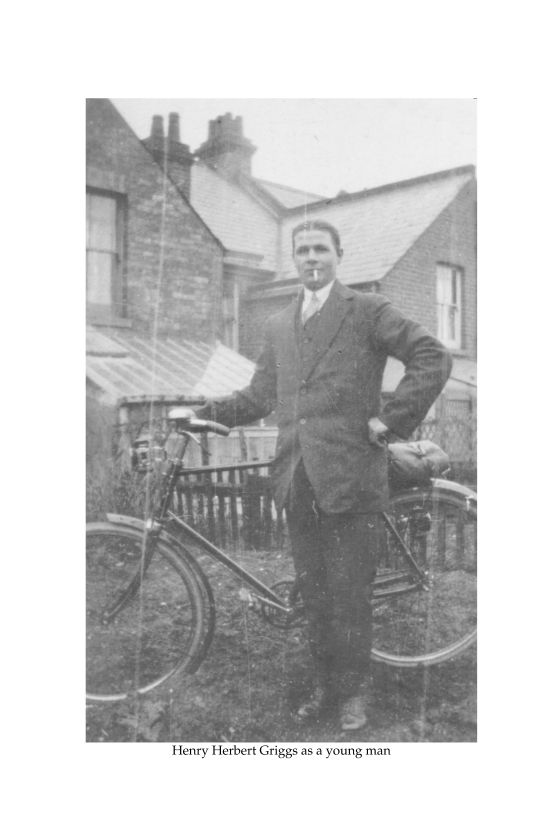 I am unlikely to discover photos of your ancestors during the research. I can add up to ten photos which you supply. This helps to bring the book into the present generations. 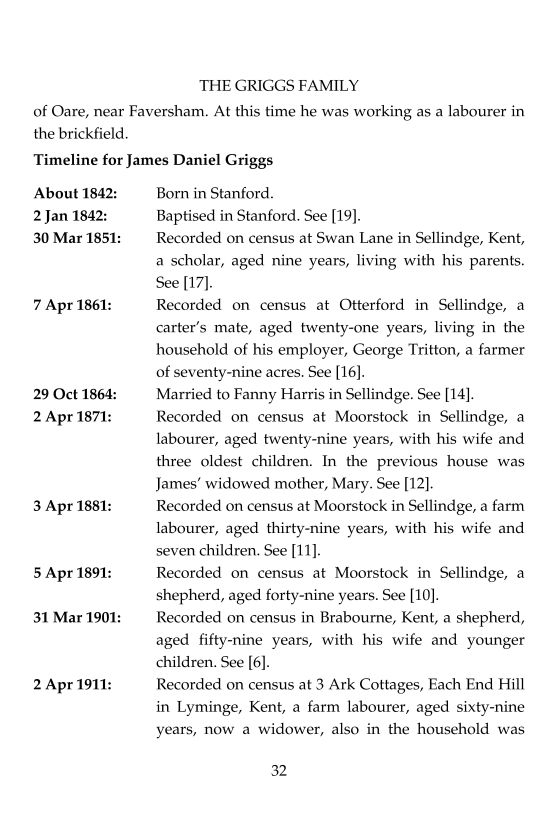 For most ancestors, the book will include a timeline showing key events in their lives, or snapshots of records they appear in. 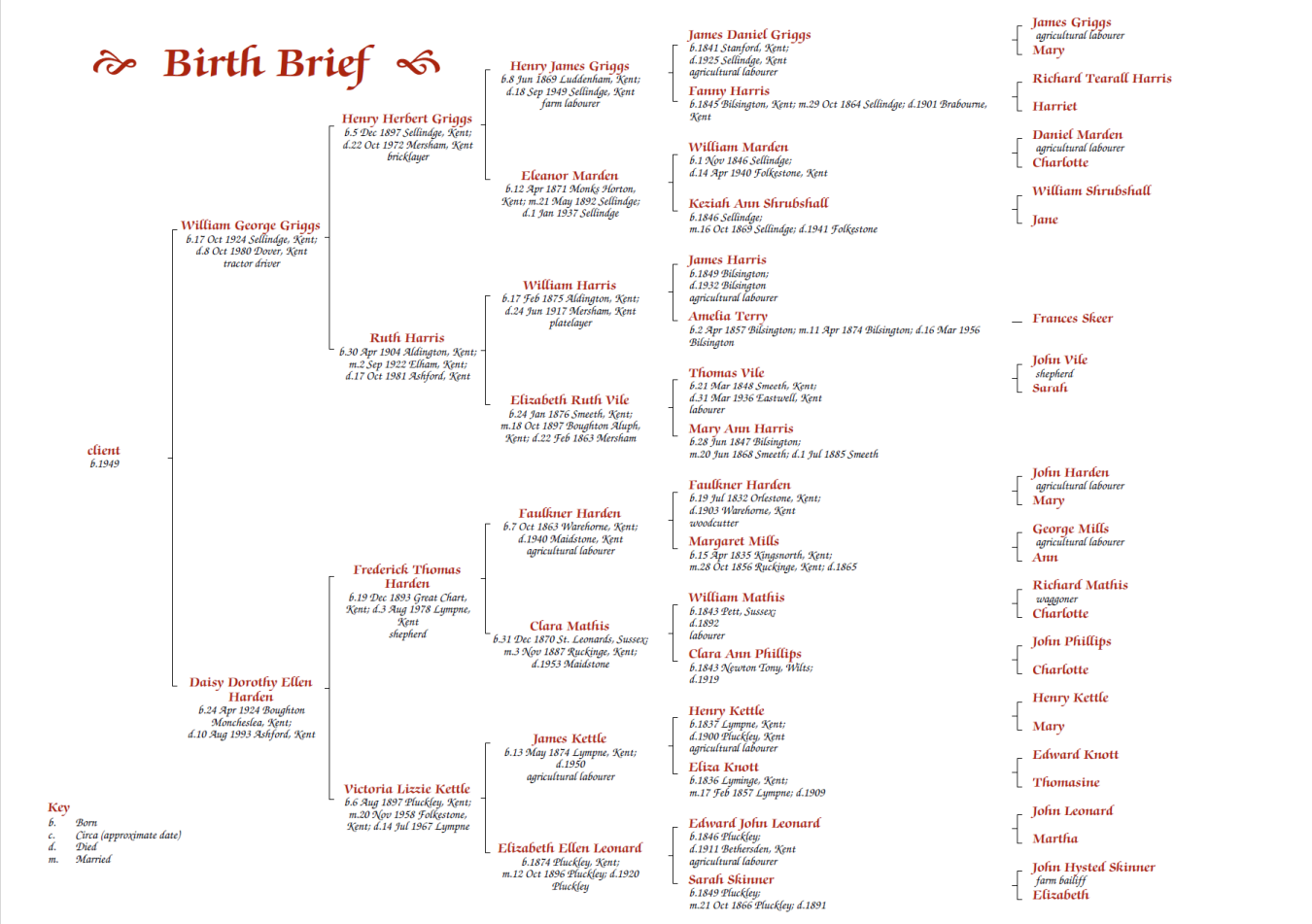 Below is a viewer so you can look inside a particular book. For the privacy of all my clients, this is an example from my own family.

You can turn the pages of the book by grabbing each page with the mouse and dragging from the corners. Alternatively, you can use the buttons to navigate.